Amongst other things, the sudden shortage of coinage, brought on by the beginning of WWI, forced many German villages, towns and cities to issue notgeld.  The first notgeld that appeared date from 31st July 1914 and were issued by the ‘Buergliches Brauhaus’ in Bremen. The 3 different face values were 1m, 2m & 2.5m. The notes had no serial or control numbers and had only one signature. They were very basic in design and were produced on heavy paper by the hectograph method. They had a validity period of 1 month, having been issued on ’31 Juli. 1914′ and valid until (Gueltig) ’31. August 1914.’ The town of issue, Bremen, is clearly marked. The word ‘Gutschein’ (voucher) is used and probably at this time with some thought………as it was ‘money’ being created by a private concern and not issued by the official money issuers/banks/Reichsbank

(The above example of a 2.5m (2m & 50pf note), has 2 brewery (‘Brauhaus’) stamp marks, each with their own authorizing signature. Maybe it was issued (used) twice??

These early notgeld issues of 1914 (& 1915) tend to be quite drab and plain, compared to notgeld from the other categories. The following 4 pieces from Deutsch Eylau are made of card and are fairly scarce. The words ‘Gott mit uns!’, translates as ‘God is with us!’. In the war, a story told was that the Germans stuck a sign up facing the Brits that said ‘Gott mit uns!’. The Brits then stuck a sign up facing the Germans that said ‘We got mittens too!’ (You’ve got to laugh……). ‘Gultig’ translates as ‘valid’, so here, valid for 50pf or 1m  etc. If you see ‘ungultig’ on your notgeld issues, then they are not valid (ie) they have been ‘cancelled’.

All collectors of notgeld will see that the notgeld issues do very often try to make light of a desperate situation…primarily the war, then the state of the economy and the hardships faced and finally, the actual notgeld issues themselves!!

The printing tended to be undecorative, with only simple printing processes being followed. Usually they have a hand-written signature (or one made from a rubberised stamp) and an official stamp on them, usually the authority behind the note. Quite often, issues consisted of a 50pf note and a 1m, 2m & 5m piece……a basic set of 4 notes. These notes would usually be of a similar design but could, for example, be in different coloured texts. (Muehlhausen set below). I would suggest that almost all 1914 issues are fairly scarce, with some issues being ‘used up’. The notgeld shortage was however short lived. Towards the end of the third year of WWI (1916), a new and severe shortage of small change again, resulted in a second wave of notgeld being issued. The collector should note, that there are very limited issues of notgeld dated 1915 – 16 and well below the ones dated 1914. 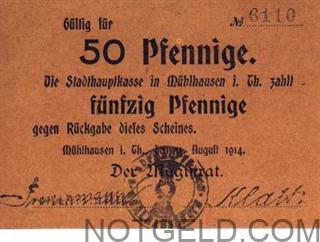 In 1914, little attention was made to the notgeld issues (by collectors) as most Germans had more pressing matters on their minds! The first emergency money appeared on July 31, 1914 and was issued by the ‘Buergliches Braihaus G.m.b.H.’ in Bremen. Pieces had a face value of 1, 2 and 2.4m.

In 1914, 452 localities issued 5,500 notes, all with short validity periods. Today, these early notgeld issues are highly collected by notgeld enthusiasts and can fetch some very high prices, depending on scarcity and condition. If you come across issues from 1914 (& 1915), I suggest one adds them to one’s collection and replace them if a better specimen comes your way.

(You can always contact me with any duplicates you have for sale, as I always have collectors trying to better their notgeld collections with more of these types). 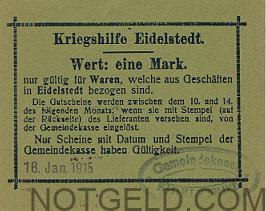 The above picture shows a note issued in Eidelstedt, issued on green paper and unusually date-stamped 16 Jan. 1915. (There are not too many notgeld with a date of 1915).

Below, I have attached a scan of an interesting 1914 piece: 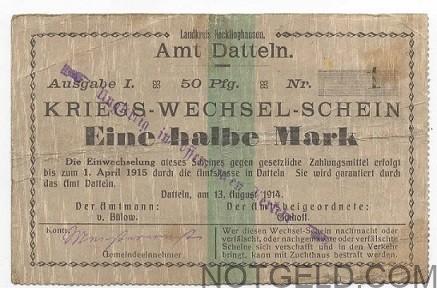 When some of these early notgeld pieces were issued in 1914, there was an original print run of so many pieces. Some issues, like the following ones from Guhrau (Polish – Gora) had an original issue of : 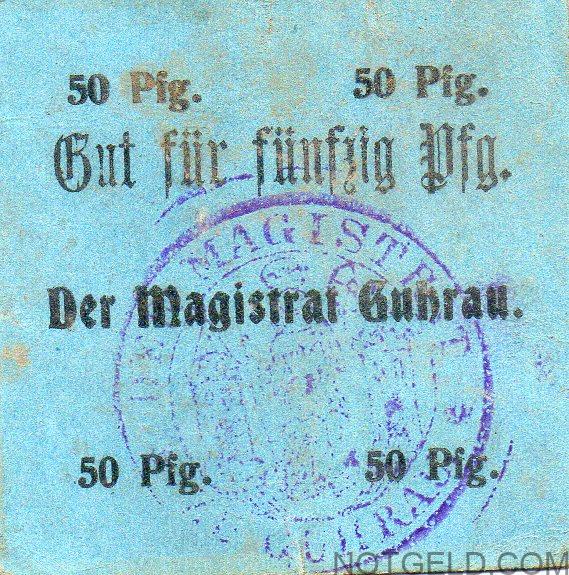 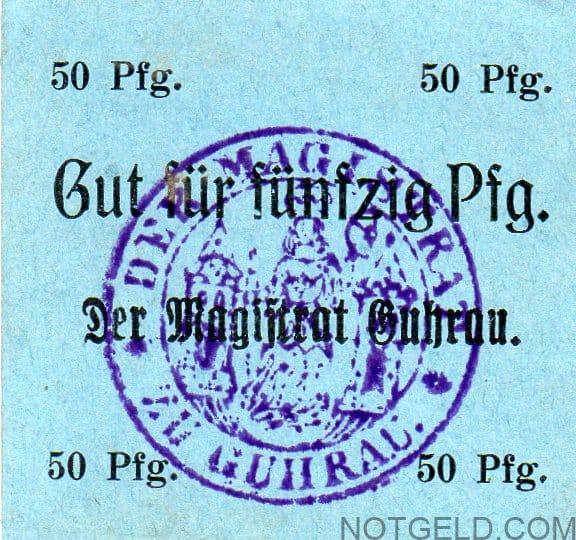 The set was issued on different coloured card – but the latter issue was ‘layered’ around plain card. You can see here where the layers have separated unintentionally! 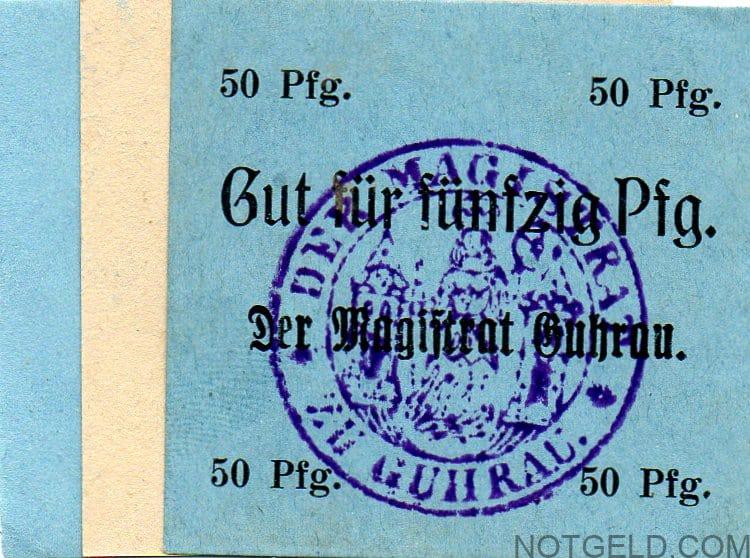 The complete sets (original and later print run) can be seen below. 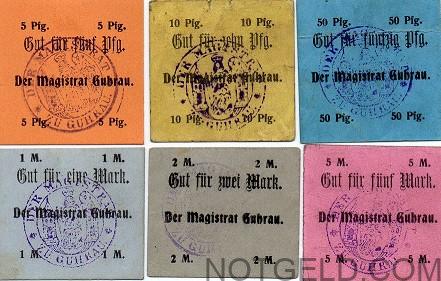 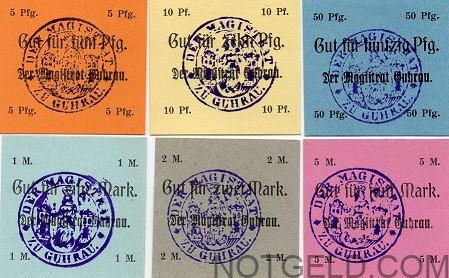