Series pieces……that is, pieces issued in sets or series, primarily for the collectors of the early 1920’s, are known as ‘serienscheine’.

Highly collectable because of the beautiful designs/pictures and also because they come in nice collectable sets! The round set of 12 different pieces, with each piece having a catalogue value of 3 euros, was issued in Eckartsberga. Dating from 1921, the set consists of 6 x 25pf pieces, 3 x 50pf pieces and 3 x 75pf pieces. The full translations can be found in my publication ‘GERMAN GEMS – the encyclopedia of German notgeld’.

The set of 6 below, were issued in Berlin and depict the German colonies. The fronts of the notes are similar but you can see the number of the piece, runnig from ‘I’ – ‘VI’. A set like this makes it easy to see if you are missing a piece or two………other sets however, are much more problematic!

(The former German colony ‘Deutsch Südwestafrika’ is now known as Namibia) – mouse over and the fronts should show…..

Serienscheine notgeld tend to be very colourful and some of the face-values are different to values used for standard monetary denominations……eg) collectors will find notgeld with a face value of 75pf, or 99pf or 80pf etc. They were sometimes issued in unusual shapes…..oval, triangular or round like the set of 12 issued in Eckartsberga. Many will have little verses or rhymes on them, like the following piece issued in Schmoelln and belonging to a set of 5 pieces:

Translation of the verse is :

****very unusual for this set, this extremely scarce piece has a serial number ****

Some sets/pieces were issued with serial numbers and some without, so you can’t just tell by a quick simple ‘rule’. The scarcer pieces are where serial numbers are missing (where they should be present) or where they are present when the ‘usual’ set was issued without serial numbers – it makes the situation a little complicated unless you have the catalogues!

Serienscheine were deliberately issued with multiple variants. Always double check your ‘duplicate’ pieces! Scans below show 2 similar pieces from Scharmbeck, but in this case, quite obviously different colouring on the reverse – one in blue and one in black. There are 2 dates on each front : 1 DEZBR 1920 – 31 DEZ 1923 (blue reverse) and 1 MARZ 1923 – 31 DEZ 1923 (black reverse). If colouring was the same – would you have noticed the different dates……………..you always have to be careful when looking.

Below are some Schoebull serienscheine pieces, showing easily spotted different ‘shaded’ or not left-side portions, but also difference in size of the ’50’ value.

Here are some more good examples of similar but all different pieces – sometimes just a fullstop or a comma! Some are more obvious where words are missing compared to the similar worded piece, or have mis-spelt words. (The first 2 scans of the 2pf pieces have ‘Not-Geld‘ & ‘Notgeld.‘ for example). The basic set of 8 x 1pf & 8 x 2pf were issued in Kitzingen and originally in single sheets of the 8 pieces, which were then cut into individual pieces. You can see that I have 1 sheet cut in half here – that is to say 2 blocks of 4 that are uncut. Individual pieces are worth 1 euro each, but an uncut sheet of 8 pieces catalogues for 50 euros!

Many notgeld (emergency money) pieces come from easily recognised ‘sets’. The note above is from a rare set of 4 issued in Oberkirchen.

The 6 notes below, form a complete scarcer set, issued in Luebeck by ‘Bund der Hotel – Restaurant – and Cafe-Angelstellten Deutschlands’.

These sets can be made up of many different combinations. More usual are sets consisting of a basic set of 3 notes with different values, eg) 25pf, 50pf & 75pf or containing 6 notes of the same value eg) 50pf, but with each note having a different design.

Serienscheine pieces tend to be very beautiful in design and very colourful.

Series or sets can contain from 1 piece up to a massive 150, as in the case of the Berlin ‘Tagliche Rundschau’ pieces cataloguing as Lm.88!! Usually the front of such notes is similar and the backs may depict different scenes, buildings, people etc.etc. These sets or series are usually very colourful and are almost all in uncirculated condition. The scan below depicts the famous fable of the pied piper from Hamlyn (Hameln)

The serienscheine issues of notgeld, in a lot of cases, tried to make light of the desperate times faced by the people immediately after WWI. The stories that they told and portrayed quite often made light of a very desperate situation. Food was in short supply and money was very tight for most people. The scan below tells one such story.

The translation reads: ‘”Oh! Pure enjoyment cannot be had, by those who must pay and do not have!“

Serienscheine pieces were primarily issued to meet a demand in the collector market that had grown from the initial issues, 6 to 7 years earlier. The 2 main catalogues available to collectors of notes in this field are by Kai LINDMAN (Lm.) and the other by Hans GRABOWSKI & Manfred MEHL (Gr/Mehl -). Several series were issued in presentation envelopes, which in time, collectors will probably come across. (Dr. Arnold Keller, the famous notgeld collector and writer of notgeld catalogues, was reported to have said that these were a ‘complete nonsense’.) Today, they give the notgeld collector yet another dimension to collecting. Add to that, the different types of account numbers (konto number) and their variants, overprints, colour variations and details such as the name of the printer either appearing or not appearing on the notes, then the collector really does need to decide at an early stage what he is actually going to collect. Many collectors go for the main sets and just keep any variants as and when they see them. I always think it is nice to have a mixture of notes in your collection though.

There are 2 series from Brande-Hornerkirchen (Lm.144). The ones depicted above, with the hatching, catalogue as Lm.144a and are scarce!! This is sometimes typical of serienscheine notgeld. You tend to get a more usual or ‘basic’set and then a scarcer variant set. The more usual set (in this specific case) has solid colours rather than the hatching.

The following picture shows a beautiful set of 6 serienscheine notgeld from Iserlohn, which catalogue as Lm.629. As the issuing authorities started to make their notgeld more colourful, graphical and beautiful, they knew more of them would be kept by the collectors. Fewer notgeld redeemed meant more straight profit for their coffers! Some local authorities that could afford it, hired famous artists to design their notgeld. The collector market that had sprung up almost overnight were delighted with these types of issues and snapped up the newly issued series as fast as they appeared.

Uncommon and scarcer colourful sets are what the collectors are really after, as the supply is so much lower than the more common sets. 2 similar sets below but slightly different. They catalogue under Lm.787b or Gr/Mehl_809.2. ‘Heimatfest’ translates as Town festival.

Serienscheine from Noerenberg (Lm.952) are a very interesting area for notgeld collectors as they show so many of these variants. The issuers of these notgeld knew that the collectors had an insatiable appetite for differences within the notes. Colour, paper, printer’s name and serial numbers are the most common differences collectors should be aware of. Most of the pieces depict scenes from a story about a huge crayfish which is chained to a post by the side of the lake (The Enzigsee). The town of Noerenberg is now known as Insko, Poland.

The scan below shows such differences. Some pieces have over-printing stamps across them, some pieces are on different coloured paper, some have serial numbers on the obverse, reverse or none at all (format may include ‘ser’ ‘*’ ‘No.’ etc and in different font size/colour)and some have different coloured coats of arms (wappen). The note in the bottom left hand corner has a blue crest and is extremely scarce. I have over 100 serienscheine variants from Noerenberg!

The following scan shows a set of 6 small serienscheine pieces from Norenberg issued on different coloured paper and dated 1920. The set is scarce, with a catalogue value of 240 euros.

The following scan shows the largest note of a set of 9 issued in Memel. Noted for their beauty, collectors find this set in particular a great joy to have in their collections. Prices for these pieces have risen due to the overall supply and demand and the larger face valued notes are fairly expensive and hard to come by in clean and uncirculated condition.

The piece(s) above are very rare. Issued by the casino in Bremen, they are stamp-like pieces issued in 4 ‘triangles’ made up of 3 pieces in each triangle. Placed together, they form a lovely and very colourful square.

Collectors of notgeld will, undoubtedly, have come across some really colourful graphic sets, which were issued in 3 colours – brown, blue and olive green. (Look at the following scan of the 75pf note from Beverungen as an example……………)

Each of these pieces appear to have been designed by the same artist and share very similar attributes.


Thoughts on the ‘3 colours’ sets/pieces from a collector colleague………… I’ve got the Helmarshausen notes nestling in one of my Hessen-Nassau albums and they are a particular favourite as I’m a bit of a medievalist on the quiet. And the Helmarshausen story is quite a riveting one in the world of the Serienscheine, isn’t it? Once I’d read it my first reaction was to think it was made up on purpose for the series, like the Noerenberg story of the giant lobster or crayfish. But I Googled a bit and sure enough, in 1330 / 31 the convent of Gottsbueren was apparently claiming that they had found the corpse of Christ and the local bishop was recognising their chapel as a place of pilgrimage. Which seems to me to be in conflict with the doctrine of the Ascension, but back then I’m sure they didn’t have the Internet to help them think it through. I did wonder if this is an example of anti-Catholic (as opposed to the more common anti-Semitic) Notgeld? The tone is humorous (the blacksmith feeling sorry for the abbess and helpfully supplying the traveller’s corpse with the marks of the crucifixion) and the verses almost playful, but then again, so is the tone in the anti-Semitic Notgeld from Beverungen (e.g the 75 Pfennig note with the pun about the elderly Jew being shaved). Even the medieval punishments on the Brakel 50 Pfennig and the scene of the secret Feme court execution on the Bruchhausen notes have a greater or lesser humorous tone and a common theme of The Good Old Days, and all four sets appear to be from the same artist / humorist. So I might be reading too much into it, it might just be from a school of humour tapping into prejudices and a mindset prevalent among certain classes in the region at the time. They really are cool looking notes though. 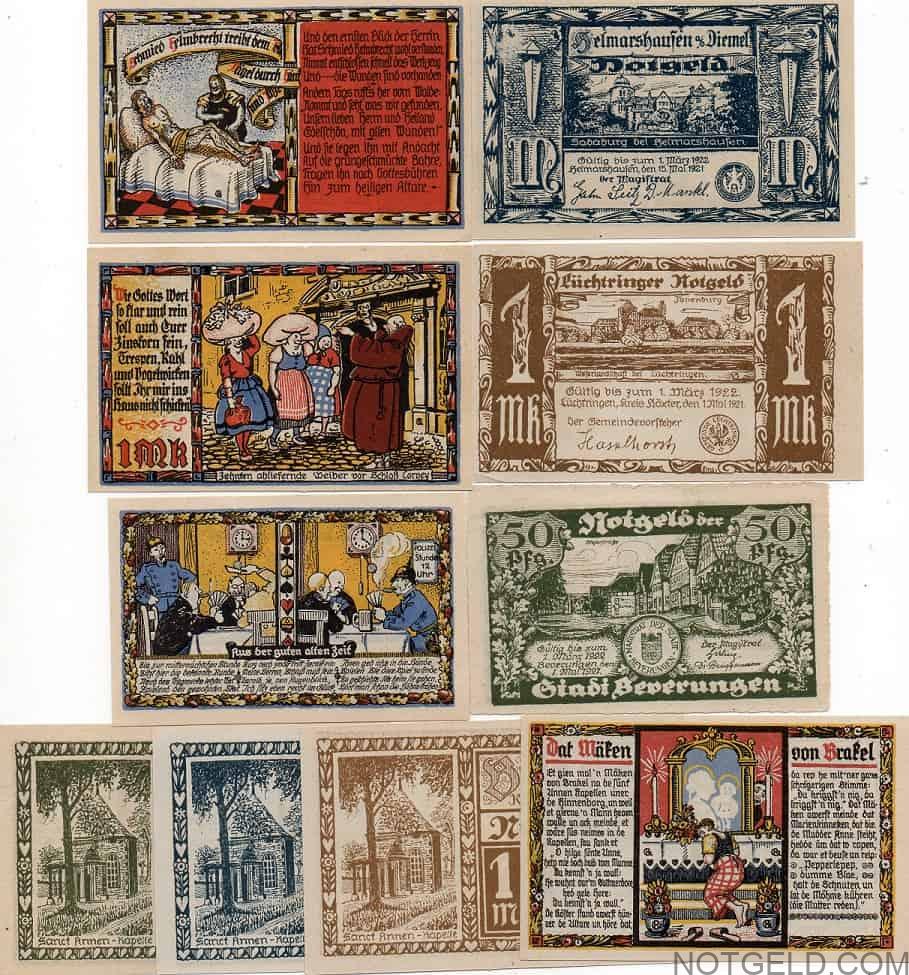